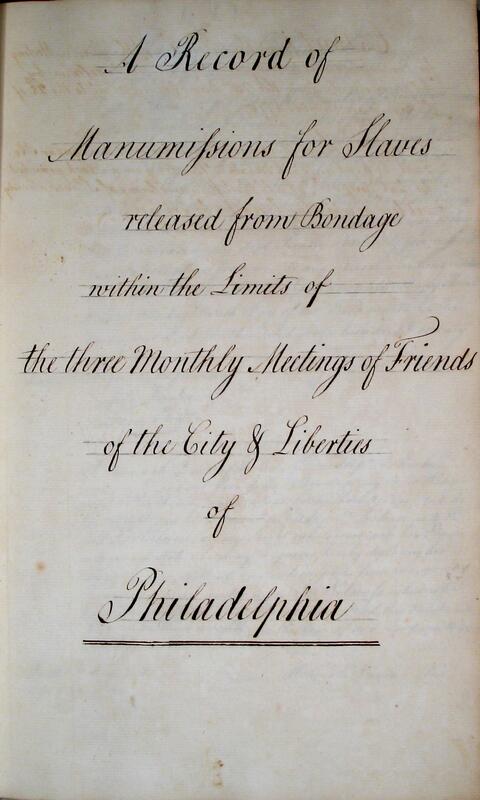 Many thanks to Trae Mohammed for inviting us to present to the African American Genealogy Group on April 24, 2021. Here are answers to a few specific questions he posed...

Why did Society of Friends decide to do the Philadelphia African-American Census 1847? Was the church actively trying to recruit Black membership at the time?

The census was undertaken by a committee appointed by the Meeting for Sufferings of Philadelphia Yearly Meeting (Orthodox). The purpose of the committee initially was to prepare a report on the trading of enslaved people, but after further consideration, the committee determined that it was also important to examine the condition of the African American population of Philadelphia both to document the existence of an “industrious and thriving” portion of that population and to discover what portion of the community may have been in need of attention and assistance.

Besides Pennsylvania and Massachusetts were there any other places in the US, or even the Caribbean with large Quaker congregations?

Within the first couple decades of Quakerism, ministers had traveled throughout the Great Britain, where the movement started, all around the Atlantic world. Quaker communities sprang up in Ireland, northern Europe, Jamaica, Barbados, Bermuda, Tortola, and in the American colonies. British Quakers provided funds for ministers to travel and the accounts (both financial and narrative) of those travels are held by the Library of the Society of Friends in London.

Before the Quaker colonies of West Jersey (established in 1674 and united with East Jersey to form New Jersey in 1702) and Pennsylvania (established in 1683), Quakers lived in various colonies in the Caribbean and in Maryland, Virginia, North Carolina, and New England. With the establishment of Pennsylvania, numbers of Quakers in the Caribbean dropped quite a lot and by 1750, due to emigration, Quakers leaving the faith and death, there were few Quakers left.

Was Sojourner Truth a Quaker? Are there any notable Black Quakers in History?

Sojourner Truth was not a member of the Society of Friends, although she attended the first meeting of the Pennsylvania Yearly Meeting of Progressive Friends, an activist offshoot branch. Truth associated with many Quakers and frequently dressed in plain Quaker-style garb. She once said, “I have always loved the Quakers and would have joined them, only they would not let me sing so I joined the Methodists.”

Some of the most notable Black Quakers in history are the mariner, businessman, and abolitionist Paul Cuffe (1759-1817); the educator and activist Sarah Mapps Douglass (1806-1882); and the civil rights icon Bayard Rustin (1912-1987). The book Black Fire provides excellent profiles of these and other important African American Quakers in history.

What about Black Quakers today?

While the majority of Quakers in the US are white, today there are substantial numbers of African American Friends (even specific African American Quaker communities, such as the Ujima Friends Peace Center). Moreover, about half of Quakers worldwide are Black. In 2017, the Friends World Committee for Consultation found: