Primary sources can take many different forms.  Letters, accounts and other kinds of documents written at the time of an event or era allow a nuanced and detailed understanding of historical issues.  Material below explains ways to locate primary sources in Tripod and Worldcat.  To find additional primary sources, historical studies in books and journal articles will often offer the best recommendations. Check footnotes and bibliographies for references to material written in the period of time you are researching.

Primary source translations that are in the Tricollege libraries will often be listed in Tripod under subject terms using the word "sources"  or "early works."  For example, the search (Keyword: (war OR soldier* OR military) AND Subject: sources  AND (Subject: (china OR chinese) produces books including:

Images as Primary Sources - "American Invaders Will be Defeated" (1951) 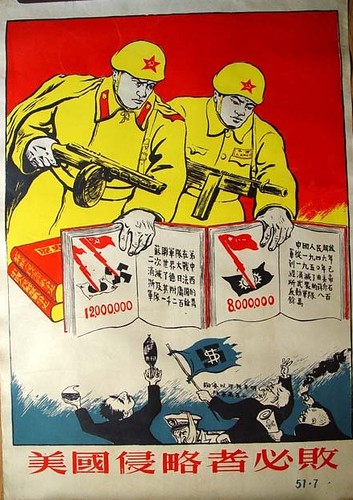