This guide describes resources for creating polls and surveys for use in research.

Google Fusion Tables is a cloud-based application that can be used to create a variety of visualizations. It is a free and only requires a Google Account to use. It is still in experimental stage, but is relatively bug-free.

Pros: Easy to use, powerful geocoding engine, mixes well with other google spreadsheets, includes lots of other visualizations       beyond mapping

Cons: Limited to Google basemap, more difficult to make beautiful maps. Does not work with Haverapps. You will need to use a       different Google account.

To use Google Fusion Tables, you'll need a non-HaverApps Google Account. If you don't already have one, you can create an account here.

Fusion Tables is accessed through Google Drive. There's a link to Drive on most Google pages, including your Gmail inbox and Google Search, or you can just click here.

Before using Fusion Tables, you may need to connect to the app. From Google Drive, click the CREATE button on the left side of the page and select Connect more apps. In the pop-up window, search "Fusion Tables" and click Connect. Now, if you go back to the Create menu, you should see Fusion Tables as an option. Click on it. You are now ready to begin the tutorials below, or you can spend some time familiarizing yourself with the interface.

To start, it may be best to follow this tutorial provided by Google Fusion Tables to make a map of their insect data. (You can choose to skip the Info window part for now, if you like)

1. Download the spreadsheet of Cope Evans letters here. You will need to dowload it to your computer (the desktop is fine).

2. Go to Google Fusion tables and create a new fusion table and import this data. (This table was exported from Triptych, and describes a collection of digitized letters held by the Cope and Evans families over many decades mostly during the 19th century. They were catalogued to describe their origin, destination, and any places described, as well as when they were sent, from whom, and to whom.) 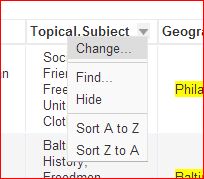 4. There is a column called "Thumbnail URL" which points to the images associated with each letter. Change the column type by selecting "single line image" from the format column as shown here: 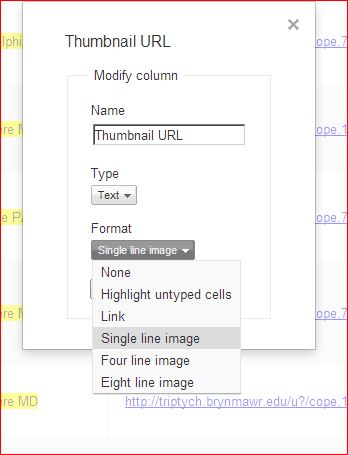 5. Now, click on the map tab, and wait for Google to Geocode the locations. There were three location columns in the data, so make sure Google is mapping to Geographic Subjects (ie, places described in the letters). Depending on the internet connection, it might take a long time to geocode, so if you get tired of waiting, and it's geocoded a bunch of them, you can stop it and close the geocoding window. You'll only be working with the ones it geocoded, but it will still work. 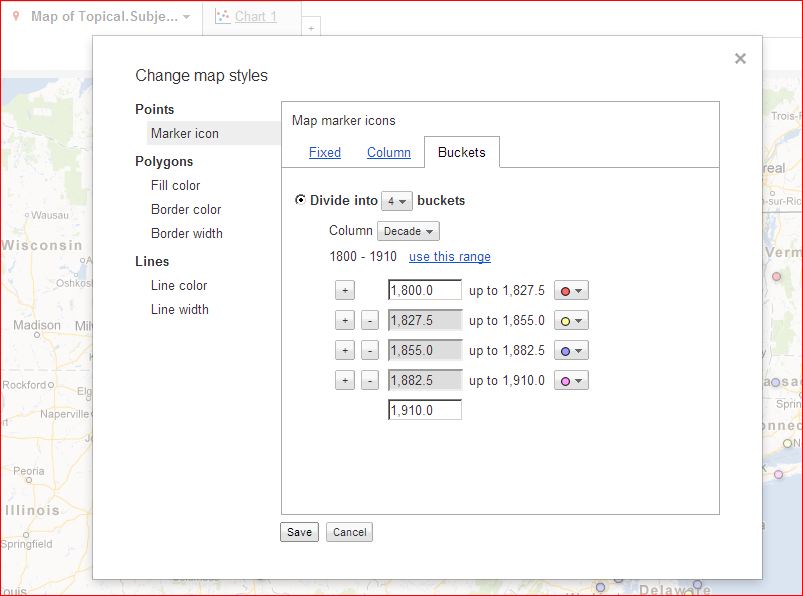 Now that you've got a grasp on how to import data and create maps in Fusion Tables, here are some more resources for making more advanced maps and charts:

.csv is a file type, standing for Comma Separated Values. It is an easy way of a saving a table or spreadsheet. Each value is separated by a symbol, most often a comma or semi-colon. Here is an example of a few lines of csv data:

There are many different types of maps that can be used to visualize data. Here are a few of the more common varities.